Yo peeps! Yes I just said Lenting, I know that’s not a word but I think you kinda understand what I mean when I say that.
I guess Lent is officially here but what does that mean? Where does Lent come from? What is it? Let me explore this…

So lent come from Jesus being in the desert for 40 days. He knew something big was going to happen and he was getting ready for it. What was this thing that was going to happen? Jesus’ death and resurrection, His crucifixion. Lent is a time of patience, penance, sacrifice, purification and conversion. It’s about seeing the light at the end of the tunnel.

We are all called to have conversions everyday, something that brings us closer to God. During Lent there is an obligation to fast from meat on Fridays (with a few exceptions) and it’s said that we should try to concentrate on a certain aspect in our life. I have often heard of people not eating sweets during Lent to help them strengthen against temptation. A lot of times I hear about people stop doing a certain things such as watching tv, eating certain things, social media…. But why not pick up something new? Maybe going for a walk every night? Maybe work on your piano skills, maybe strengthen your prayer life.

I often see Lent as a time where we have some sort of goal and even if we don’t reach it during these 40 days we can keep it up afterwards. This year I decided to do something a bit different than what I’ve been doing in the past. I noticed that keeping in touch with people when I’m often on the road is really hard and I thought about this for a while. What can I do to strengthen my relationship with people who I don’t often see but really care about. And one thing kept coming to mind and that is writing them letters.

So for forty days I will be writing one letter a day. It’s already been a great challenge, finding the time, actually writing it, not ranting while writing :P. But writing these letters gives me time to actually think about these individuals, how the affected my life, who they are as a person and also a time for me to pray for them. We all need prayers so why not spend my time writing these letters in prayer?

The reason why I’m writing less here is because I’m handwriting more now. I really enjoy writing letters but more so enjoy receiving letters because I know the thought and effort put into it. 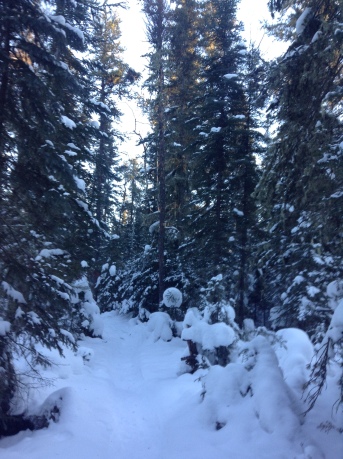 Yesterday I went on a hike with two priests and it was absolutely beautiful with the snow and the icicles! We had time off on Monday because it was Louis Riel Day, the founder of our province. He was Métis and also pushed the Aboriginal and french rights.

8 thoughts on “We’re all Lenting!”