A few days ago I was texting someone and they really put things in perspective. This person had asked me what my plans were for the week and I told them that I was wanting to go back to the pool as I had been lazy ever since I got back from Poland.
What this person replied back was a true challenge, …live like Pope Francis taught us, get off that couch!!!! 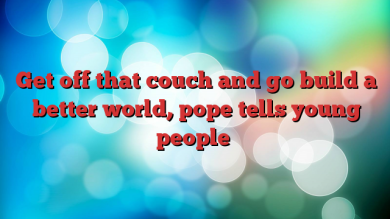 I needed to get off that ouch as Pope Francis said while addressing us at WYD in Poland. This led me to thinking about a lot of different things such as temptation. How that subject came to mind is a whole different story.

Temptation is something we face everyday and we really can’t deny that. Temptation also comes in different forms whether it be the temptation to watch one more cat video, to say something that doesn’t need to be said, taking another cookie or dealing with an addiction. We have to face them head on.

Where do our temptations come from? This is an easy answer, they come from the dark side. The unspeakable can only tempt up, he can’t force us to do anything. As for God, He can sweep us out of any situation, He can call us back to Him whenever and however He wants.

Just look at Enoch, he was walking with God and all of a sudden he was no more as God had taken him away with Him.

As they walked on still conversing, a fiery chariot and fiery horses came between the two of them, and Elijah went up to heaven in a whirlwind…
2 Kings 2:11

How awesome is that?  Imagine you’re just walking along, hanging out with a friend and BAM!! now you’re in Heaven, in perfect communion with God!! That would be so awesome!!

But the unspeakable one can’t do that. We have to willingly chose to fall into his temptations. But how can we get out of these temptations? When I’m faced with it I think of the STAR.

I have to STOP what I’m doing. TAKE a few deep breaths. ACKNOWLEDGE what I really want and RESPOND in a healthy way.

REACT in a healthy way also includes thanking God or calling on Him for help.

Now to link both topics I brought up, temptation and building a better world. We naturally want to change the world for the better but temptation takes over and we become lazy and don’t do anything. Now is the time, if we keep on putting it off to later I can tell you exactly what’s going to happen, ABSOLUTELY NOTHING. If you want change don’t just talk about it but be part of the change. Rome wasn’t built overnight.

How am I fighting the stand still temptation? How am I making the world a better place?

5 thoughts on “Tempted to change”